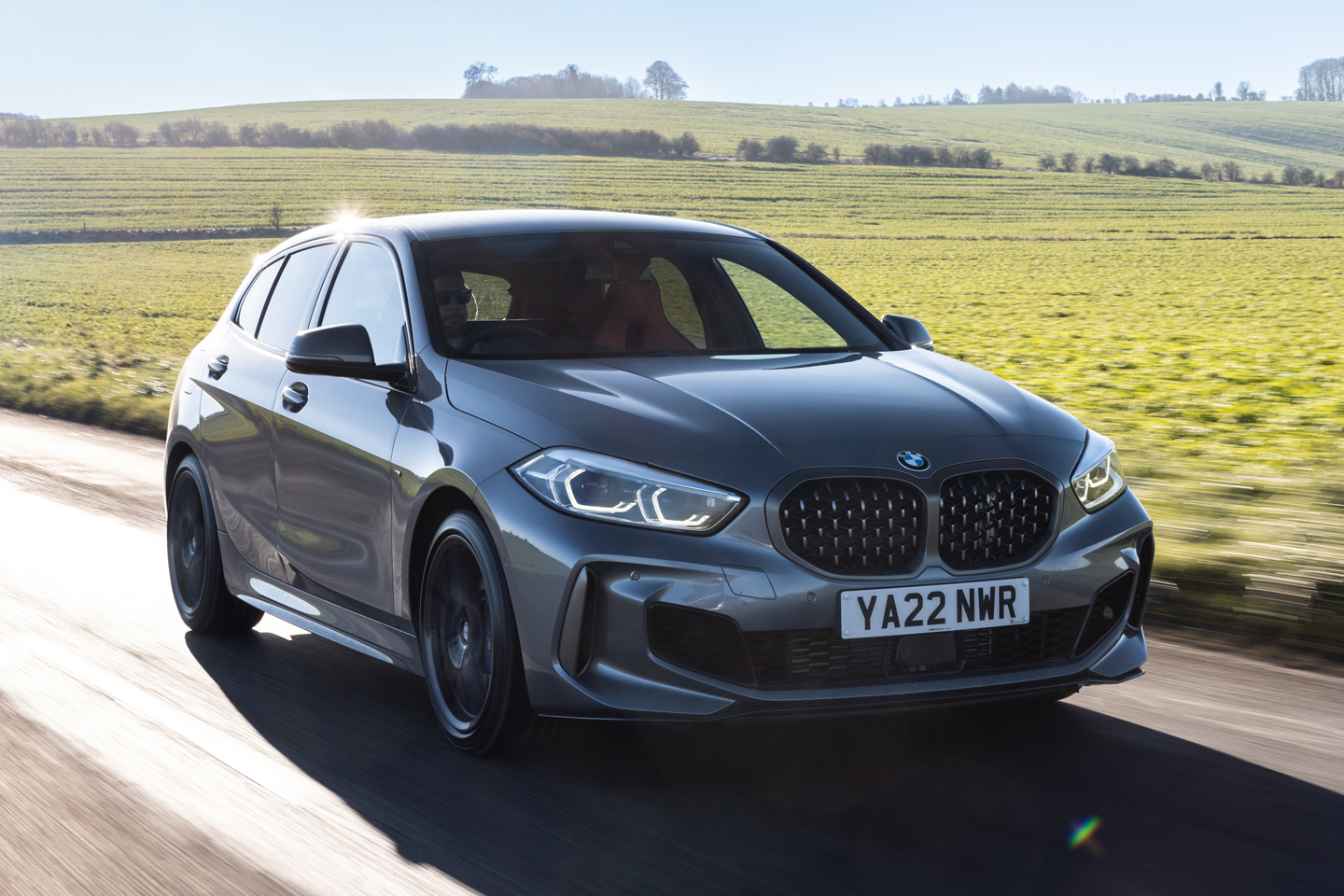 If ever a hot hatch needed some revisions, it was the BMW M135i xDrive. When the F40 usurped the rear-drive F20, it had a point to prove: that the move to a transverse four-pot and all-wheel drive was actually progress. It didn’t. It felt like a car designed by committee, then handed to a bunch of engineers to make the best of it. The concept felt contrived and the execution half-baked. As a pokey hatchback, you could argue it was broadly acceptable, but as a hot hatch it was a dullard. Sorry BMW, but it’s true.

And BMW knew it was because it’s now been revised and claims to introduce all the added drama the old one was missing. The front wheels have more camber, there are new hydromounts for the front wishbones, which sounds like something for the updated Grease film, and there are redesigned mounts for the rear trailing and control arms. The spring and damper rates have been tweaked, too, which is all about reducing roll and improving steering feel – i.e. making the M135i finally come alive.

I see the committee has been reconvened, though. There’s a line in the press pack that says, ‘the retuned drive soundtrack in the cabin makes the driving experience even more emotionally engaging’. When phrases like ‘emotionally engaging’ are deployed, the results are almost always anything but. 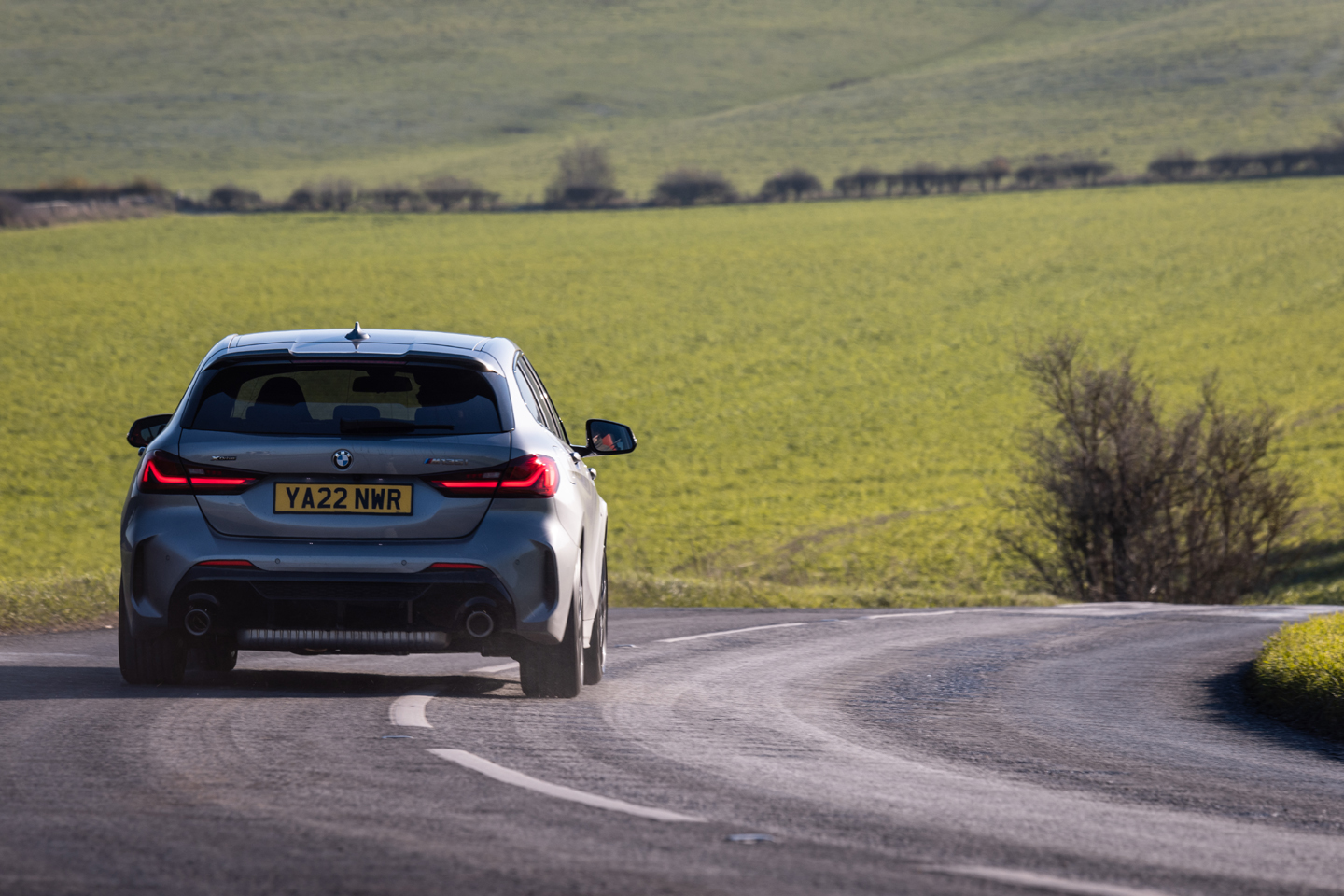 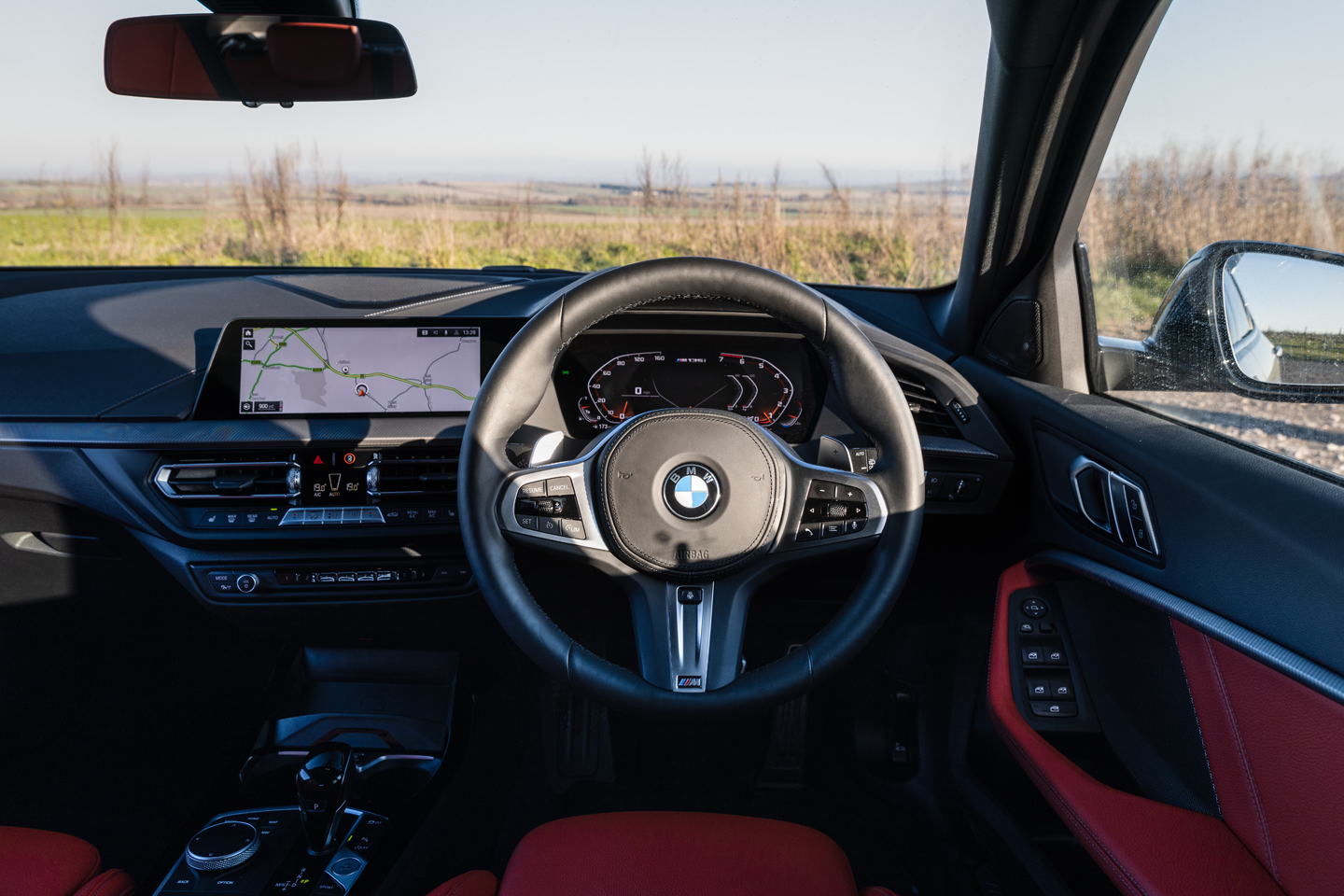 And so it proves. The latest M135i is certainly quick enough – yet out-and-out performance was never its problem. The little 2.0-litre turbo delivers some pep, let me tell you, thanks to 306hp, and with 332lb available between 1,800 and 4,500rpm, it’s jolly flexible as well. The problem is that the engine – despite claims that its emotional circuitry has been switch on at last – is still dull. BMW’s fours don’t sound very nice full stop. That’s an inherent issue, and painting over the cracks with some extra parp isn’t going to solve it. I’m not saying it’s horribly harsh (it isn’t) but it’s not a sweet-sounding or inspiring motor either. And when you turn on even more synthesised ’emotions’ with the Sport mode, which does the X-Box speaker thing and pops a bit, it still fails to impress.

Then there’s the gearbox. The eight-speed auto. It’s okay in manual mode, when the changes mostly come when you want them. It’s also good enough in auto mode when you are driving in an everyday fashion. Not brilliant – it fumbles for, say, third, if it’s been loafing in eighth on a light throttle and you suddenly hit the kickdown switch – but that’s not what irks me. No, it’s the way it behaves off the line and in slow-moving traffic that does it. It’s quite jerky when you take up drive, and, if you have to stop again, the grabby brakes are equally as bad, as is the clunky stop-start of the engine. The combination makes your passengers think there’s a lead-footed nincompoop behind the wheel.

But at least the steering will be brilliant now, right? Wrong. The steering has zero feel. On a slippery, cold day in the countryside, you make the sign of the cross before every bend, because there’s nothing tangible to rely on when it comes to sensing the grip. Even the on-centre feel is poor. When you’re ambling along a motorway it’s very easy to meander offline if you’re changing a setting in the cabin. 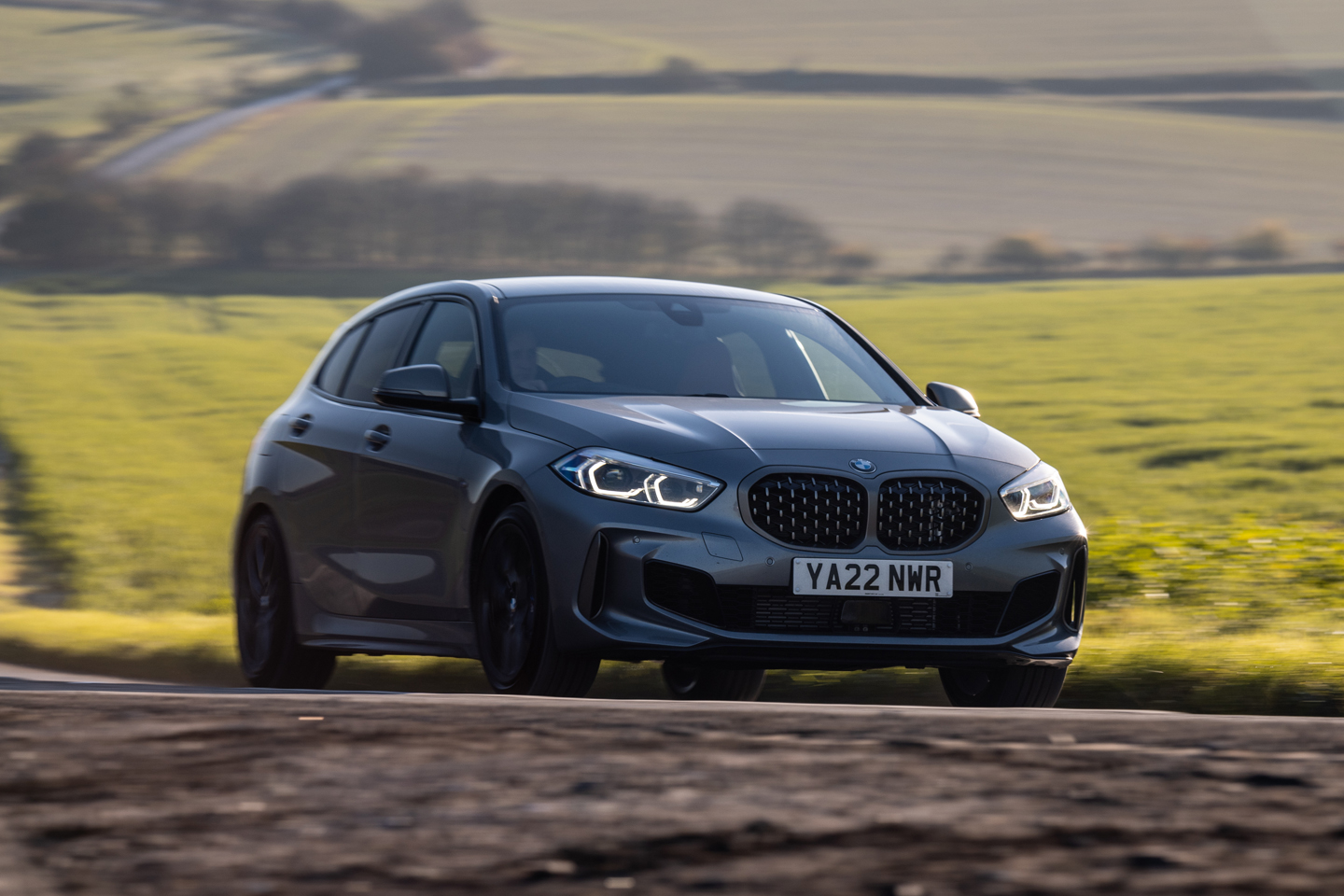 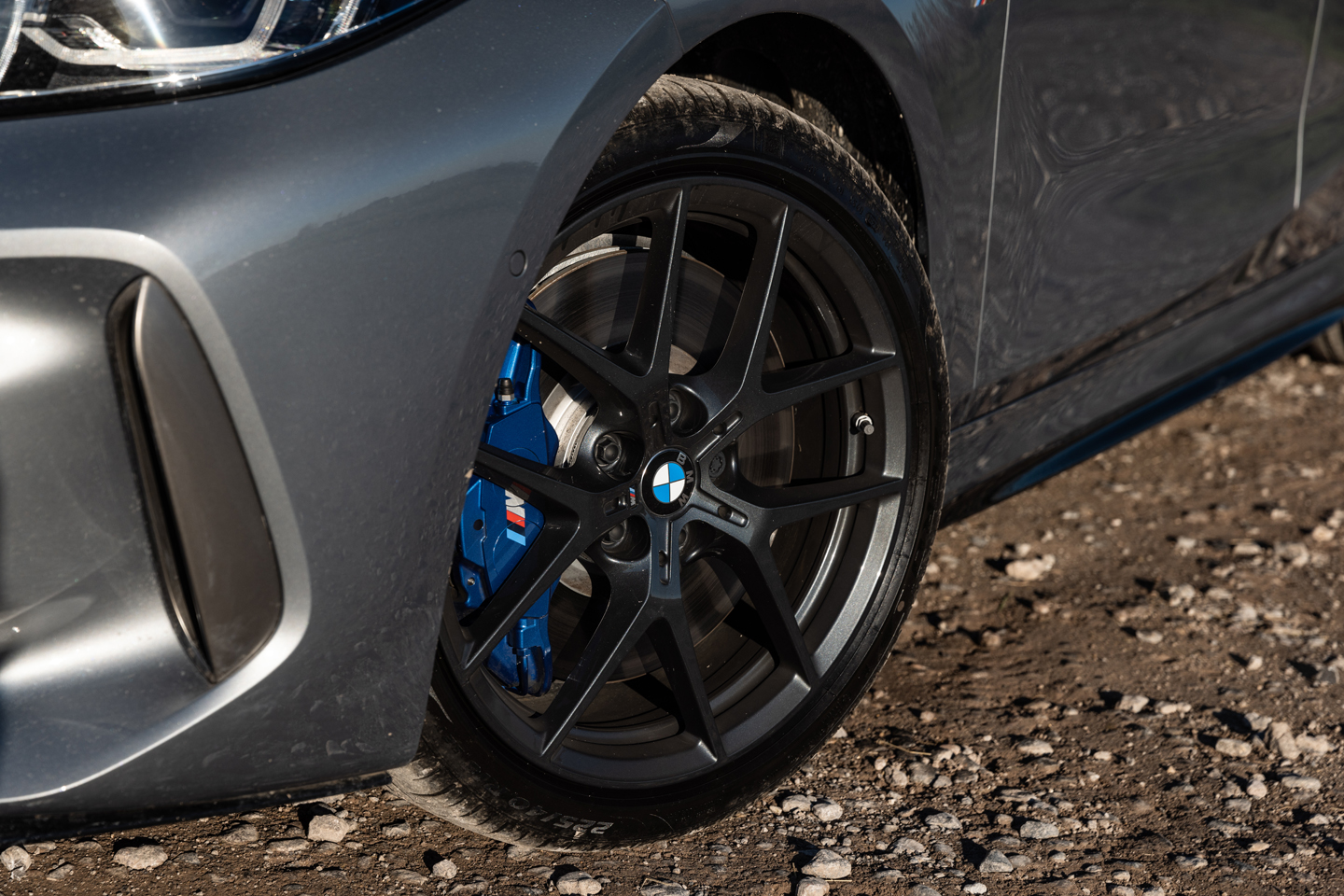 At least changing the settings is easy to do, because the 1 Series comes with lots of simple buttons that cover all the basics – temperature, heated rear window, power-folding mirrors and the like – and an iDrive controller is on-hand if you need to dive headlong into the infotainment menus. And because this is BMW’s older-generation iDrive, those menus are broadly simple to trawl through. So I’m not blind to the M135i’s positives, which happen to also include the interior fixtures and fittings. They’re not top-class, but they’re top-end for this class, with decent materials applied solidly. Overall, it’s much nicer inside than a Mk8 Golf GTI.

Anyway, back to the driving. Torque steer was a big issue with the previous model, so some of the changes were aimed at reducing it. It’s better, but the problem hasn’t vanished entirely. The cold and slippery conditions probably didn’t help, but getting on the power when the front wheels have a grip differential still results in the M135i tugging left or right – and there’s some camber sensitivity in there, too. The traction otherwise is good and so is overall grip. The car carries plenty of mid-corner speed, there’s very little roll, and it can blast out of a turn with some conviction and even a little line-tightening rotation. That’s a combination of the mechanical front diff and activated rear axle doing their bit to quell the understeer. It won’t go sideways, but that’s fine; hot hatches don’t need to in my book. They just need to tuck in tidily, and the M135i does.

The standard model comes with passive M Sport suspension, but the test car we were given came with adaptive dampers – a £500 option. I hate to think what the standard car rides like. There’s this perception that a sporty car has to be firm. It doesn’t. The very best sports cars ride sublimely – even the most outlandish ones, like the Lamborghini Aventador. That’s all very well, you might say, because that’s a very expensive car. Lower down the price ladder, with less high-end hardware to pick from, achieving compliance and control is a harder task. That’s not true, though, is it? The FK8 Honda Civic Type R is proof of that. That was a hot hatch so capable in terms of wheel control that it would demolish anything along a back road. Yet it was also extremely comfortable the rest of the time. 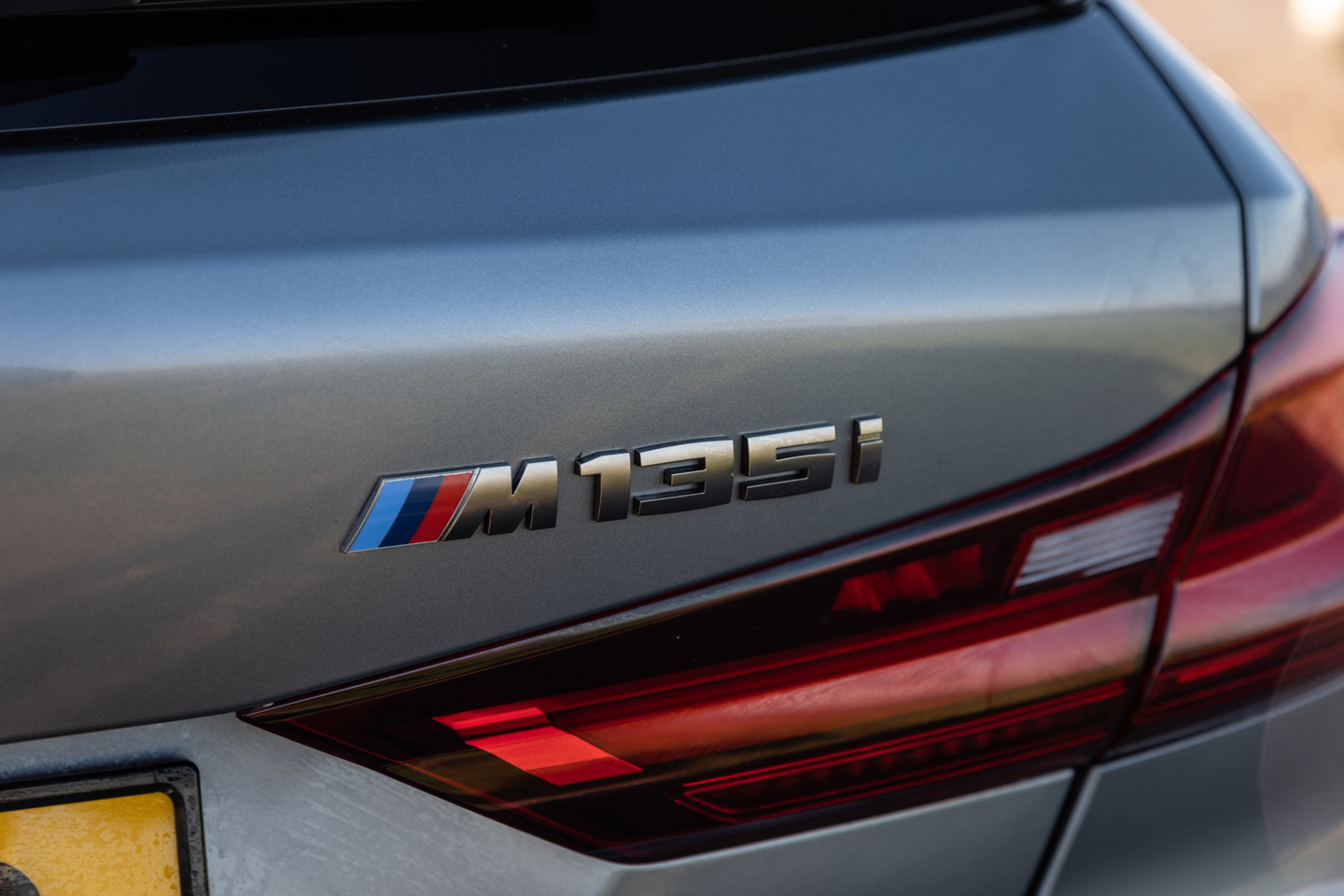 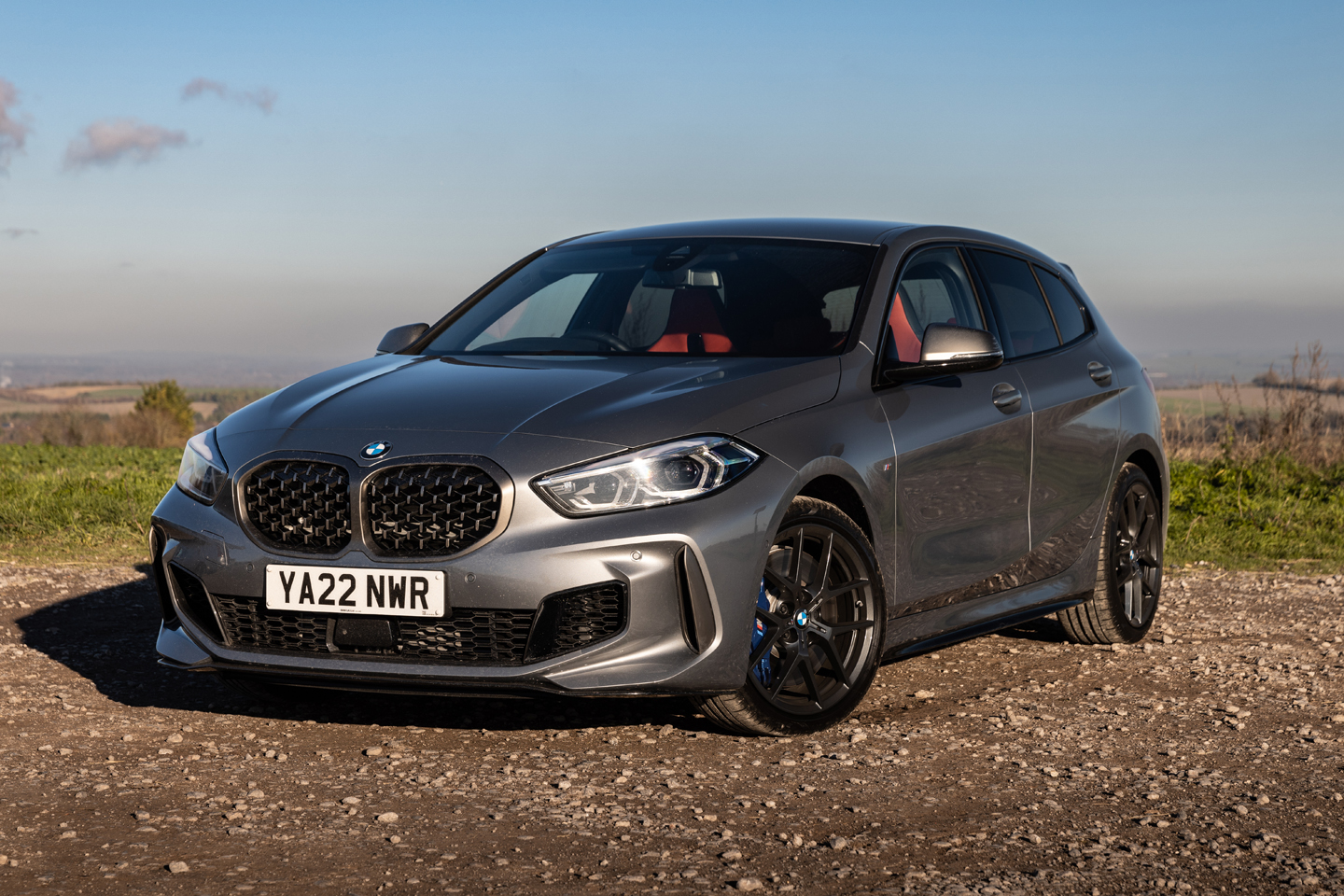 In contrast, the M135i isn’t particularly comfortable even in its Comfort mode. True, it’s not the worst hot hatch I’ve tried, and it doesn’t thump or jar horribly over bumps – but it never settles over the little imperfections. It is  busy and reactive, and the consistent fidgeting becomes annoying because it doesn’t calm down fully even at motorway speeds. The rolling refinement is good, though. The Michelin Pilot Sport 4s will kick up when interacting with a really coarse surface, but generally road noise is subdued and wind noise is soft and consistent at 70mph. The only thing that harms its long-distance credentials is the front seats, which feel flat under the thighs and seem to perch you on top of them, rather than semi-submerge you within their bolsters.

Once again, then, I feel like the M135i would be fine if it were badged up as an everyday 128i, had softer suspension and a better gearbox. Then it would be a quick and worthy hatchback. But describing it as a hot hatch demands a bit more, and in that regard, the M135i fails to deliver. It’s a real shame that the latest Civic Type R has become so expensive, because that prevents it from being the default choice once was. Even so, its value for money as a proper hot hatch is still readily apparent next to the M135i. I wonder whether or not the fact that BMW has undercut the Golf R by a couple of grand speaks volumes about its expectations. Because if you’re after an everyday fast AWD hatch that’s also fun, for me, the R wipes the floor with the M135i.

What if you can’t deal with the Golf’s iffy interior and infotainment, though? Is there a BMW that’s fast and fun and easy to live with in equal measures? Yes, the 220i Coupe or, better still, the M240i xDrive. I know there’s £7,000 between the M240i and the M135i but, if you can afford that, the premium is well worth it. The M240i is silky in almost every respect. The M135i, however, isn’t. It’s still a bit of a sow’s ear.